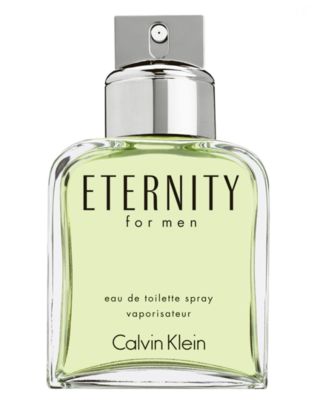 Part of a Collection

What remains beyond the romance? Calvin Klein Eternity Eau de Toilette for Men is a distinctive men's eau de toilette and an ode to the power of lasting love. Sensitive yet masculine, strong but indisputably refined, Eternity was the first eau de toilette for men to reject the notion of love as nothing more than whirlwind romance, choosing to focus instead on the timeless power of eternal commitment. A classic, timeless scent and the top men's eau de toilette for modern men at ease with themselves, aware and confident of the world around them and their place within it. This green fougere perfume for men is complex and instantly recognizable, opening with fresh, tangy bergamot for a sharp, clean start, before veering into zingy geranium for an effortlessly masculine heart underpinned by mandarin and sage and a sprig of aromatic lavender. Deep, solid cedarwood leads the way through the base, coupled with moss for a rain-drenched dry-down that feels soothing and nostalgic. A masterpiece of understated elegance, the bottle was inspired by antique French perfume bottles in a nod to the idea of ever-lasting style.

Next generation starting with Eternity.Never goes out of style.Long lasting.The smell is nice and refreshing.

Next generation starting with Eternity.Never goes out of style.Long lasting.The smell is nice and refreshing.

Was this helpful?
Huy
Eternity

Was this helpful?
Aaron
Eternal Bliss

The scent is refreshing.

The scent is refreshing.

Was this helpful?
VIJAY
good

Was this helpful?
J
Very nice!

Was this helpful?
Hector

Was this helpful?
Rhonda

Nice smell on my husband!!

Nice smell on my husband!!

Was this helpful?
PENNI
Cologne user

One of my husband's favorites so I got the largest size! Clean smell

One of my husband's favorites so I got the largest size! Clean smell